November 5th saw me driving from Epsom to Thame near Oxford to film a wedding at the wonderful wedding venue that is Notley Abbey. I am very fortunate to be the recommended wedding videographer for Notley and the other 4 wedding venues that Bijou Weddings own and run. My regular sidekick/ camera operator Peter was away on other filming duties, so I was going to be working with another cameraman that Peter recommended.

The beauty of filming at Notley Abbey is everything is all under the one roof, or rather in the same grounds as we have the gorgeous main house for smaller more intimate ceremonies, the drinks reception and general milling and chilling and the larger barn for bigger ceremonies and the wedding breakfast, plus the evening reception. This, apart from the fact that it is nice and easy for everyone, also means less travelling time involved from one venue to another and therefore more filming time for me 🙂 This Friday’s weekday ceremony was held in the barn, as we had too large a crowd for the main house, but everyone managed to spread out nicely across the grounds and buildings. My other favourite thing about Notley Abbey is they also take great care of the wedding suppliers so my Peter-stand-in Adi and I enjoyed a lovely main course  🙂

This wedding was a short-notice booking as the couple initially had decided not to have a wedding video but when the bride’s mother was diagnosed with cancer and it was uncertain whether she would make the wedding decided to book me. Days later I had another enquiry for the same Friday where the couple initially decided not to have a wedding video but then the bride’s father was taken ill suddenly so they changed their mind. How bizarre, two short notice bookings for the same Friday in November with identical circumstances…The good news for my first couple was that Mum did make the wedding, so I was able to get loads of lovely footage of her on her daughter’s wedding day after all! The bad news for my second couple was, of course, that I was already booked so had to pass on the enquiry. 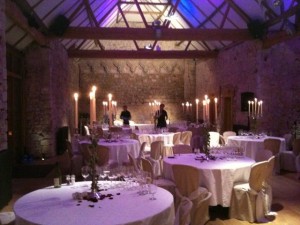 I have a few days off from filming now, but I am flat-out in the studio, I have just finished editing and copying 220 DVDs for a local dance school whose show I have been filming for the last ten years or so and also get a wedding video ready to ship to the US for an Indian bride and groom who recently got married.